Everything in our world follows mathematical laws: from the motion of stars and galaxies to the transmission of phone signals, bus timetables, weather prediction and online banking. Mathematics lets us describe and explain all of these examples, and can reveal profound truths about their underlying patterns.

Unfortunately the school curriculum often fails to convey the incredible power and great beauty of mathematics. In most cases, school mathematics is simply about memorising abstract concepts: a teacher (or a video, or a mobile app) explains how to solve a specific kind of problem, students have to remember it, and then use it to solve homework or exam questions. This has changed very little during the last century, and is one of the reasons why so many students dislike mathematics.

“It is a miracle that curiosity survives formal education.”

In fact, the process of studying mathematics is often much more important than the actual content: it teaches problem solving, logical reasoning, generalising and abstraction. Mathematics should be about creativity, curiosity, surprise and imagination – not memorising and rote learning. 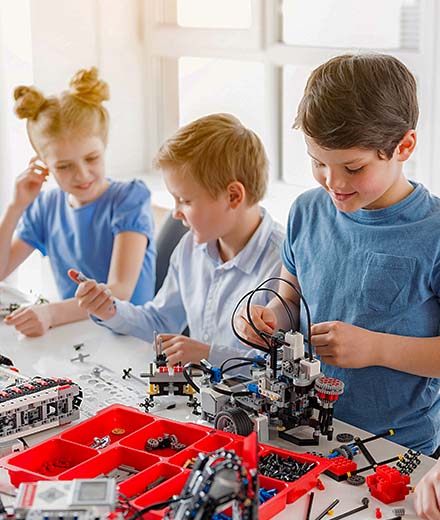 Rather than telling students how to solve new kinds of problems, we want them to be able to explore and “discover” solutions on their own. Our content is split into many small sections, and students have to actively participate at every step before the next one is revealed: by solving problems, exploring simulations, finding patterns and drawing conclusions.

We built many new types of interactive components, which go far beyond simple multiple choice questions or textboxes. Students can draw paths across bridges in Königsberg, run large probability simulations, investigate which shapes can be used to create tessellations, and much more. 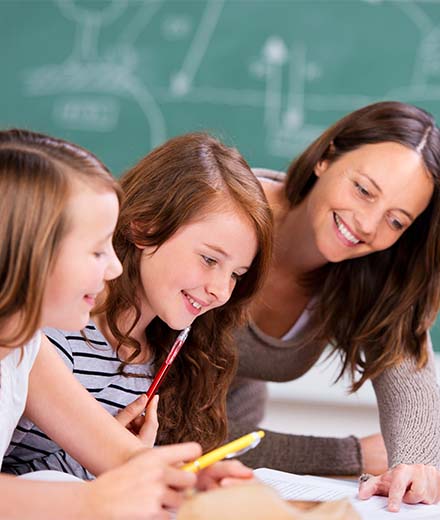 As users interact with Mathigon, we can slowly build up an internal model of how well they know different related concepts in mathematics: the knowledge graph. This data can then be used to adapt and personalise the content – we can predict where students might struggle because they haven’t mastered all the prerequisites, or switch between different explanations based on students’ preferred learning style.

A virtual personal tutor guides you step-by-step through explanations and gives tailored hints or encouragement in a conversational interface. Students can even ask their own questions. 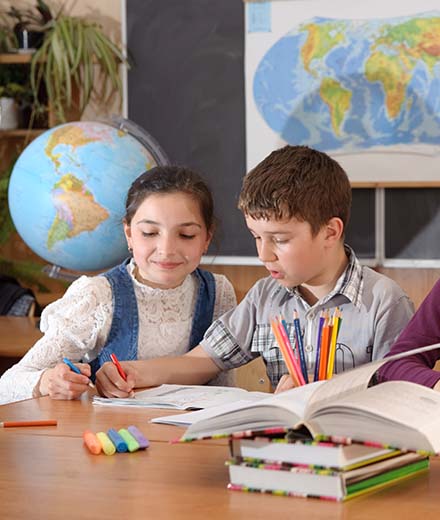 Using Mathigon requires much more effort and concentration from students, compared to simply watching a video or listening to a teacher. That’s why it is important make the content as fun and engaging as possible.

Mathigon is filled with colourful illustrations, and every course has a captivating narrative. Rather than teaching mathematics as a collection of abstract facts and exercises, we use real life applications, puzzles, historic context, inter-disciplinary connections, or even fictional stories to make the content come alive. This gives students a clear reason why what they learn is useful, and makes the content itself much more memorable.

All these goals are difficult to achieve in a classroom, because a single teacher simply can’t offer the individual support required by every student. Of course, we don’t want to replace schools or teachers. Mathigon should be used as a supplement: by students who are struggling and need additional help, students who want to go beyond what they learn at school, or even by teachers in a blended learning environment.

The ideas of active learning and personalised education are nothing new – teachers and researchers have been experimenting and writing about it for many years. Mathigon is one of the first implementations on a fully digital platform, which means that we can reach a much larger number of students. Of course, we are just getting started and there is still a long way to go.

One of the key underlying concepts is constructivism, the believe that students need to “construct” their own mental models of the world, through independent exploration, discovery and project-based learning. Constructionism was first developed by psychologist Jean Piaget (1896 – 1980), and then extended by mathematician, computer scientist and educator Seymour Papert (1928 – 2016).

There is plenty of research and evidence supporting this approach to teaching mathematics, and many existing ideas or examples we use as inspiration:

Seeing as Understanding: The Importance of Visual Mathematics

The 2 Sigma problem: The Search for Methods of Group Instruction as Effective One-to-One Tutoring

Media for Thinking the Unthinkable

Magical hopes: Manipulatives and the reform of math education

The End of Average

The Value of Teaching Mathematics

Many popular games contain elements of mathematics: from Noughts and Crosses to Tetris, Monopoly or Settlers of Catan. In this workshop, we will discuss how probability, combinatorics, logic and computer simulations can help us find optimal strategies for different games, and how games can be used in the classroom to make learning more fun and memorable.

In the school curriculum, mathematics is usually presented as “finished”: students just see the final version of thousands of years filled with exploration, discovery, surprises, mistakes and misconceptions. In this workshop, we will discuss what it feels like to “discover” mathematics, and how you can give students this experience in the classroom.

We are surrounded by networks: from roads and rail tracks to supply chains, the internet, and even social relationships. Discover how mathematics can help us understand these connections (called "graphs"), and draw some fascinating conclusions.

For many students, learning mathematics is simply about memorizing abstract rules and procedures. In this talk, we want to explore how storytelling and real-life applications can make the content more accessible and engaging, and how creativity and problem-solving can show students the great power and surprising beauty of mathematics.

Join us at the Future of Education Technology conference, and hear about how Mathigon can make STEM learning more fun and interactive than ever before.

Creativity is an essential part of mathematics: the ability to see patterns and relationships, or to come up with new models and representations. Here we discuss how you can bring creativity into the classrooms – from art, tessellations, origami and symmetry to music and problem solving.

TMiP is a conference for people who work in mathematics communicating. It includes workshops by expert guests, discussions, networking sessions and projects showcases.

Join us at the annual Conference of the International Society for Technology in Education to hear about the latest advances in interactive and personalised learning resources.

Join us in the BETT Futures area to learn more about Mathigon, a BETT Awards finalist in the “open educational resources” category.

We are running a workshop to prototype ideas for a new “dynamic medium” that allows anyone to easily visualise and explore mathematical ideas.

Mathigon is the Reimagine Education Awards winner for “cultivating curiosity”. Join us to learn more about our research, approach and technology.

Join your favorite educational content creators for a night of thought-provoking conversation and fun, hosted in the largest spaceflight museum in the world.

EDUCATE, the UK’s leading research-based EdTech accelerator, is hosting its inaugural Demo Day at London City Hall. Mathigon and other award-winning companies will present their work to transform education.

Storytelling can help make abstract mathematical concepts for engaging, relevant and memorable for students. In this presentation we will share dozens of examples, ideas and resources.

Join us in the BETT Futures area to learn more about Mathigon, a BETT Awards finalist in the “open educational resources” category.

The MATRIX conference is hosted by MoMath, the national museum of mathematics in New York City, as well as MathsWorldUK.

We are running a workshop to collect ideas and build prototypes for how smartphones can be used more effectively within science and mathematics exhibitions.

Philipp studied mathematics at Cambridge University, and mathematics education at the UCL Institute of Education in London. He founded Mathigon while volunteering with outreach projects in Cambridge.

Previously, Philipp worked as software engineer at Google, Bloomberg, Wolfram Research and Goldman Sachs. He consults for educational organisations like MoMath and IMAGINARY, and regularly speaks at conferences all around the world.

Cindy is the Executive Director and CEO of MoMath, the National Museum of Mathematics in New York City, where she works to change public perceptions of mathematics.

Conrad is the co-founder and CEO of Wolfram Research Europe, the makers of Mathematica and Wolfram|Alpha. He also founded the Computer-Based Math Project, to reform maths education.

James is the founder of Global Math Week and mathematician-at-large for the Mathematical Association of America. He is committed to sharing the delight and beauty of the subject.

Rich is a co-founder of Android, partner at Google Ventures, and director at Google, where he works on new products for students and teachers.

Sarah is a former startup founder with over 16 years of experience scaling exceptional education programs and schools, and coaching founding teams of EdTech Startups globally.

Simon is the author of bestselling books like “Fermat’s Last Theorem”, “The Code Book” and “The Simpsons and Their Mathematical Secrets”, and founder of the charity Good Thinking.

David studied mathematics at Vassar College and education at the University of Massachusetts. He is a middle school math teacher at Weston Middle School in Weston, MA. In his 20+ years at the school, David has held a variety of leadership roles. In 2017, he was a runner-up for the Rosenthal Prize for Innovation and Inspiration in Math Teaching awarded by MoMath.

Eda studied mathematics education at Bogazici University and has master’s degrees in Educational Supervision and Instructional Design. She has been teaching mathematics since 2003 and has been organizing Math Events, Exhibitions, and Math Weeks since. Eda has also spoken at several educational conferences in Turkey, and she is writing about math education at funmathfan.com.

Ethan first experienced the joys (and struggles!) of learning math at home. His parents, both computer programmers, passed on a love of numbers and problem solving to their son. Ethan studied Political Science at Whitman College and taught high school math for six years. He is passionate about making math education engaging and relevant, and presenting the human side of math.

Hamza is the admin of the largest math page on Instagram, @daily_math_, which has over 90,000 followers coming from 140 countries. He is the author of two #1 Amazon bestselling books, Advanced Calculus Explored and Paradoxes, the latter of which gained the praise of New York Times bestselling authors and other renowned math communicators.

Jen has been teaching math for 24 years to students of all ages. She studied Mathematics Education 6-12 at Southeastern University and Mathematics for College Teaching at Appalachian State University. She is interested in how mathematics is taught around the world and has led two travel fellowships “Discovering Math on Trails Past and Present” and “Popularizing the M in STEM.”

Katie is a mathematician based in Manchester, who talks and writes about maths in schools, at science and music festivals, on radio and TV, in books, as part of theatre shows and on the internet.

Kevin is a software engineer and content creator with a Master's degree in Educational Technology and Applied Learning Science from Carnegie Mellon University. Previously he has built educational technology with IBM, CMU, and as part of the Global Learning XPrize finalist team, RoboTutor.

We want to thank all these volunteers and supporters, and many others, for their contributions, advice, proofreading, feedback and generous donations: